The Hidden Story of Gutenberg’s First Typeface and Bible Typography

As professional typeface designers (and as fellow curious people), the question of firsts seems to always fascinate us. And more specifically, the “authors” of revolutionary discoveries that shaped the world as we know it today.

Johannes Gutenberg is no such person.

Although popular belief credits the Mainz-based goldsmith with the creation of the first printed book, typesetting as a process was already well-established, as the evolution of typography has shown us.

While Chinese artisans pressed ink to paper as early as the second century A.D. and the first movable type was developed in the Far East centuries prior, Johannes Gutenberg’s impact on Western civilization was yet to be witnessed.

Even though Gutenberg is not the first to invent the original movable type, his role is crucial to enlightenment throughout the lands of Europe. Johannes’ mechanized type was a massive improvement to handwritten manuscripts and religious scribes from late-medieval times. What took years to complete before the Gutenberg press, took typesetters merely weeks to ink.

The faster production of printed materials and the instrumentality Gutenberg demonstrated, became the stepping stone to modern typeface design and printing.

Enter the necessity of a functional, readable typeface! And indeed, a special type was used in Gutenberg’s most popular publication – the 42-line Bible, the Mazarin Bible, Biblia Latina, or also referred to as the Gutenberg Bible. 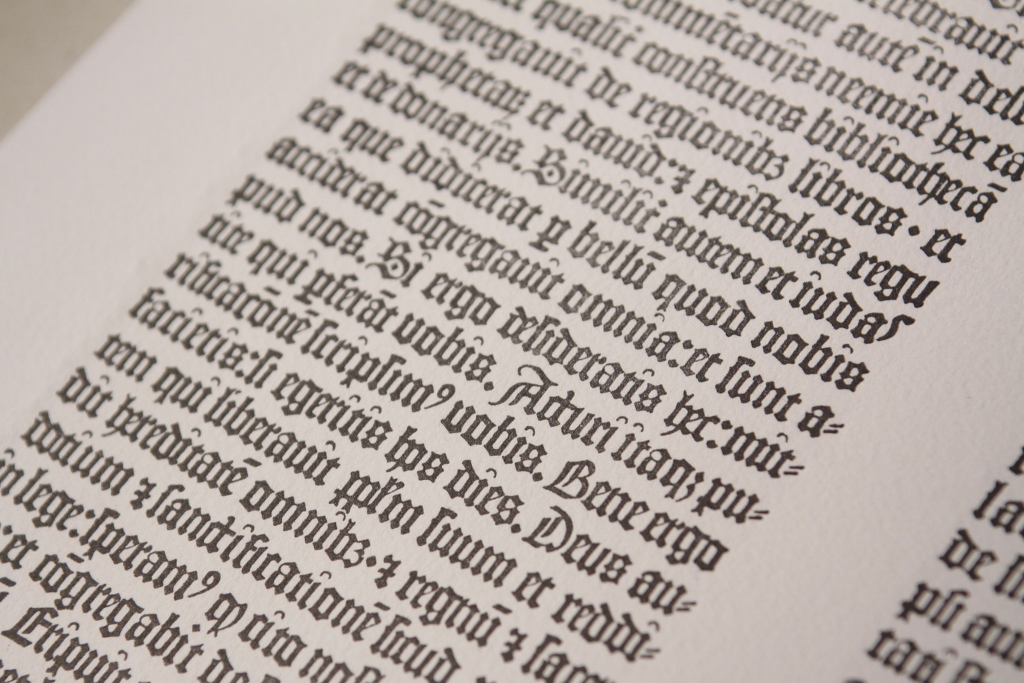 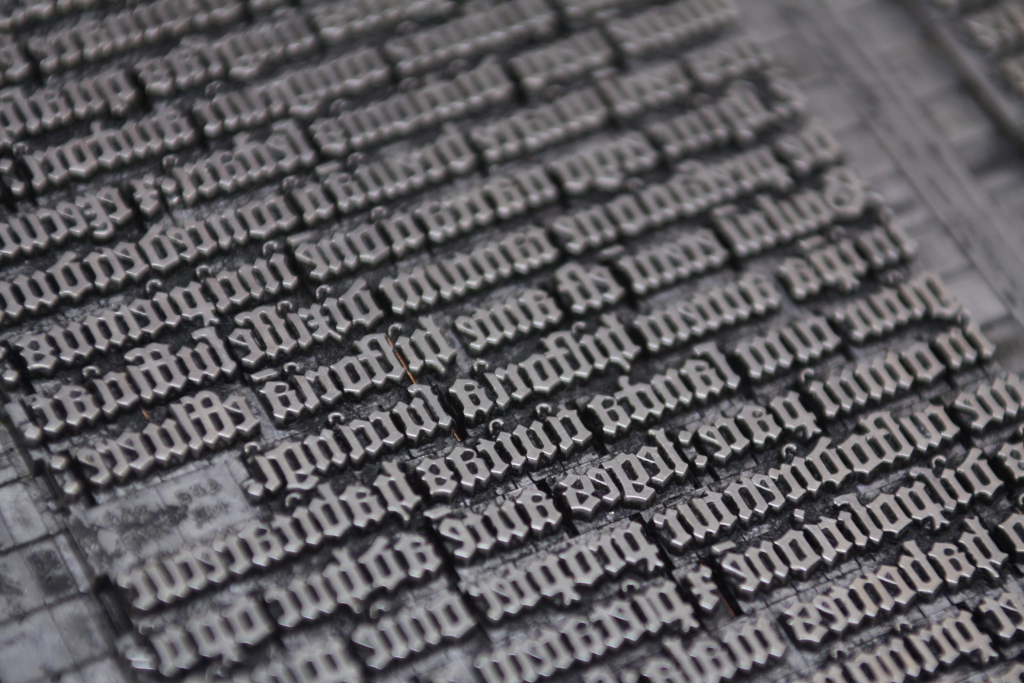 Reconstructed Gutenberg press, placed at the Department of Typography and Graphic Communication at the University of Reading, UK. Photos by Ben Mitchell.

The elusive nature of the B42 typeface

Theories, speculations and major collation efforts surround the 49 surviving copies of the Gutenberg Bible. Centuries later, its pages still hold the answers to some key questions regarding the printing process and exact technology used.

Much of Gutenberg’s life is veiled. Only fragmented documents and letters tell us of his early life. It is believed he was skillful in the art of metals, and coming from a region famous for its winemaking, the idea of a press for printing was not far behind. Although we don’t know what the Gutenberg press looked like, it is his printed materials that are the actual physical evidence of his legacy.

The 42-line Bible first appeared in 1455 and there were approximately 180 copies produced. The renowned first print signifies the abandonment of scribal traditions. However, as you get closer to its bookish appearance, you quickly discover there’s more to it than two monolithic columns of 42 lines of text per page. 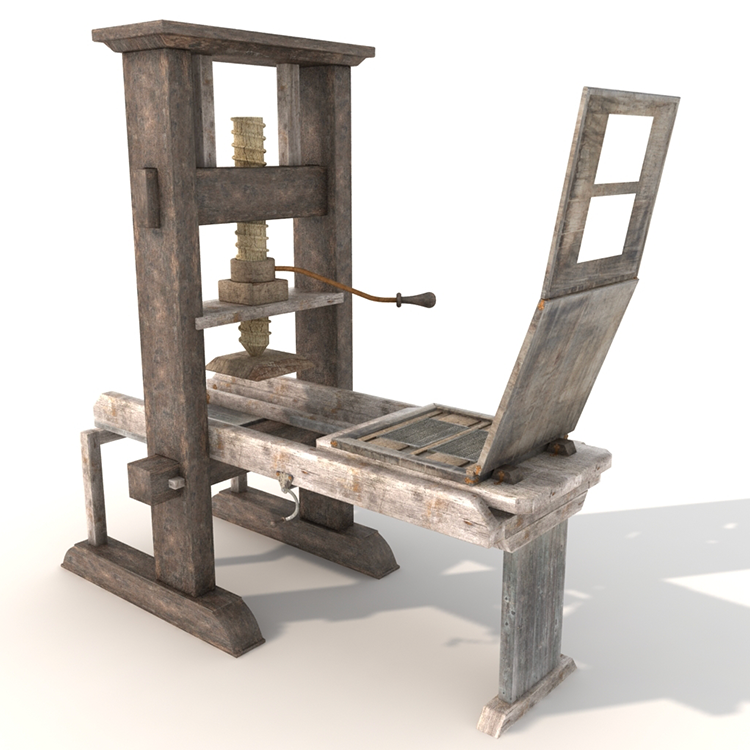 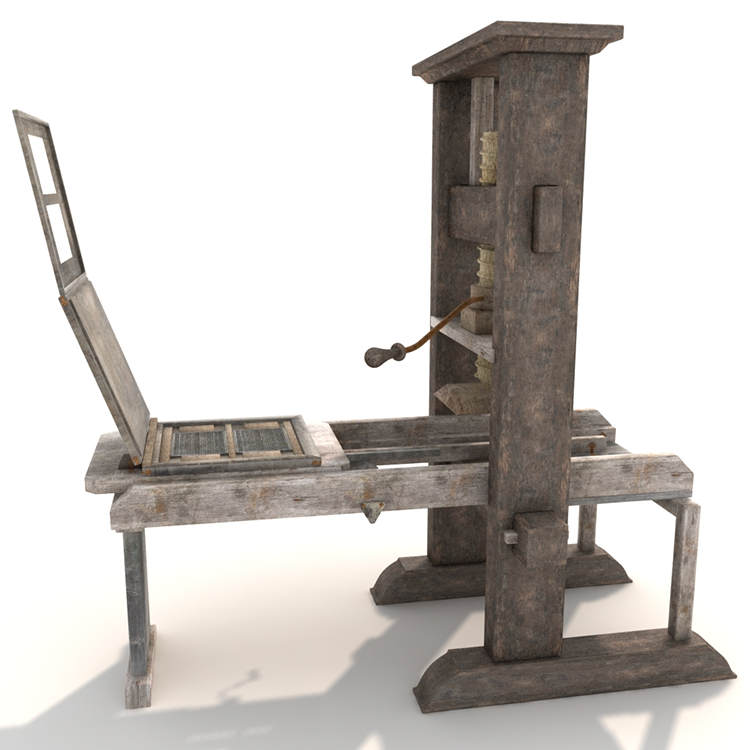 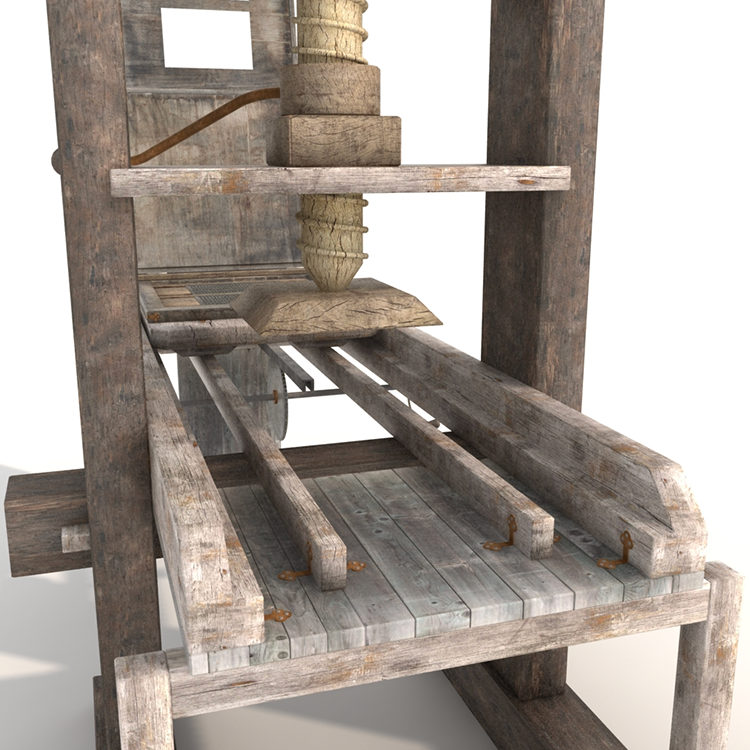 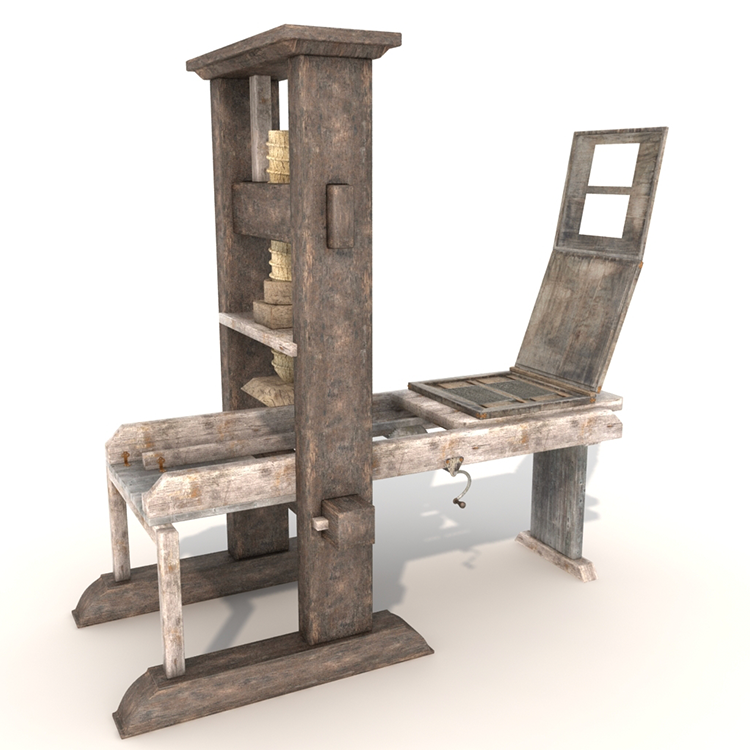 Books from the 15th century have no title page, no page numbers, and rarely credit the printer. The name of Johannes Gutenberg appears in none of the surviving copies. A reliable historical source from 1499 (the Cologne “Cronica”), however, tells of the Gutenberg Bibles, but with zero mention of exact locations or dates.

Truth is, the Gutenberg Bible is enormous. When not printed on vellum (in this case calf’s skin), the Bible was printed on the size of paper known as “Royal”. And royal it is — each sheet measures about 430 x 620 mm, before being folded into what is called a folio. And it’s only fair to say, if it weren’t for paper, printing would not be a commercial success.

The ink used by Gutenberg was one of his own newly developed hand-made tools as well. It is oil-based, thick, and resembles a varnish or oil paint. As a result, each letter pressed onto paper left some ink spread, achieving the strikingly natural calligraphic look and distinctive texture of rust fonts.

And so, what we observe today is a Gutenberg Bible printed:

But why weren’t the first printed books in Europe more lavish visually? 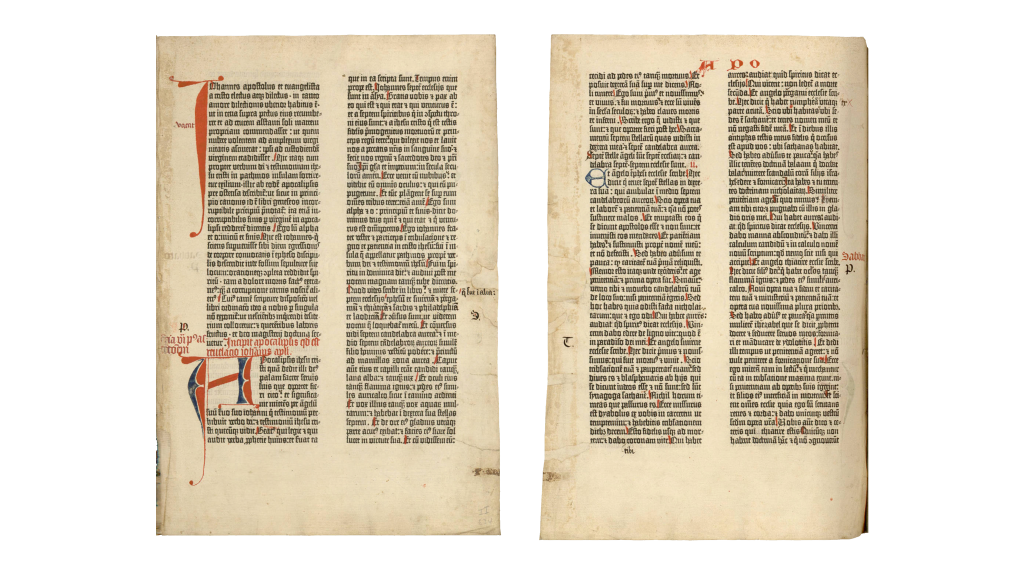 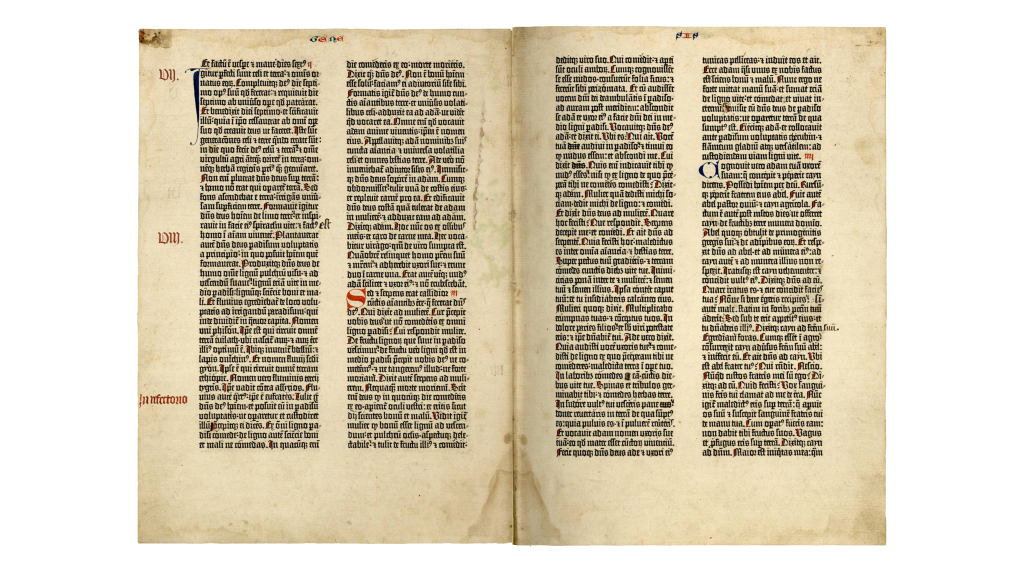 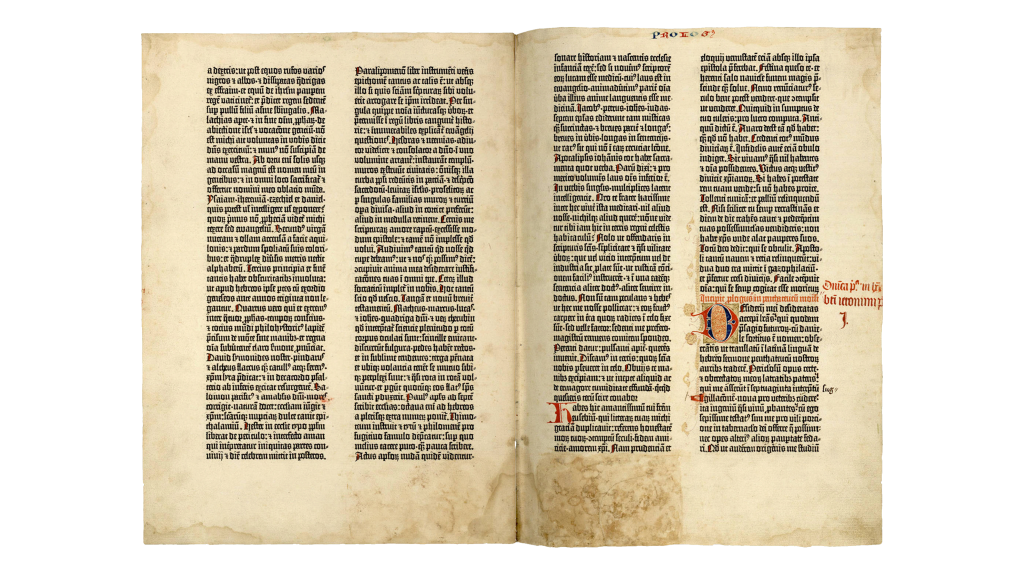 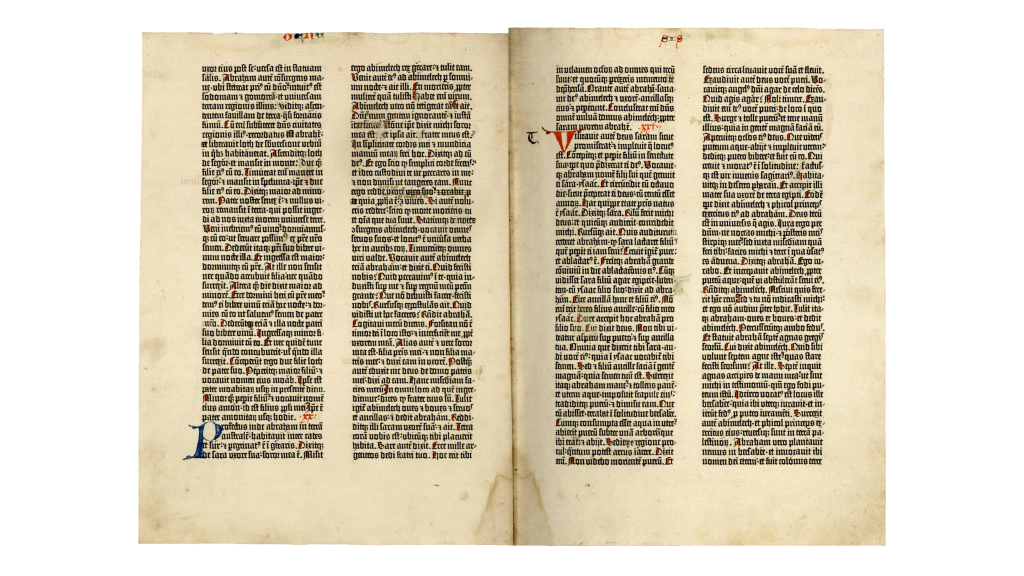 The answer is simple.

Gutenberg’s typefounding process focused on automation, consistency, and recycling. Mastering mass production in Europe was the main vision of the inventor, and might we add – a strategic typographer with distinct business acumen.

It was the type mold that became Gutenberg’s true innovation, making multiple copies of single letters in the same height a reality. Once much cheaper production of the books was achieved, the famous printer opened the doors to enlightenment for all educated classes.

And although his creation single-handedly meant the end of handwritten scripts and the birth of typography errors like bad kerning mistakes, Gutenberg doesn’t seem to have wanted to break off with the scribal traditions.

For him, it was all about speeding up the process and the future of typography lied in replicating manuscripts of the time. In part, because people were used to them, and in part because he believed that’s the only way to achieve a desirable market price.

Typography aesthetics might not have been the primary intention of Gutenberg’s printed books, but he was indeed looking for ways to make the “ideal manuscript”. These efforts were further supported by the intricate hand-drawn illuminations – crafted additionally after a book was printed at the request of the buyers themselves.

And even though the goal of typography at first wasn’t about type or design, it was the pursuit for the perfect manuscript that paved the path to later features – the inclusion of page numbers and the adoption of the title page.

What is the name of the typeface that Johannes Gutenberg created?

The lack of accreditation in Gutenberg Bibles goes beyond stating the name of the printer. The typeface created for the Bible was, as all other elements in the book, largely focused on the scribal tradition and optimization of space.

Johannes based letterforms on the liturgical scripts of the era – Textura Quadrata, a form of Blackletter. It is characterized by tight spacing and condensed lettering, which helped reduce the materials used in the making of a printed book.

On a related note, other names for the Blackletter script are Gothic script, Gothic minuscule, “Old English”, also sometimes referred to as Fraktur. Fraktur is a notable script of this type, but it does not represent the entire group of blackletter typefaces. “Old English”, on the other hand, is not to be confused with the Old English language (or Anglo-Saxon). Over time a wide variety of blackletter fonts appeared, but four major families can be identified: Textura, Rotunda, Schwabacher and Fraktur.

The specific style of Blackletter for the Gutenberg Bible is called Donatus-Kalender (D-K) – rarely used in metal type since Gutenberg. The original typeface used by Johannes’ press is recognizable by its dramatic thin and thick strokes, some elaborate swirls on the serifs, and the impression of the texture of a woven pattern across the page.

Given Gutenberg’s practical nature, it comes as no surprise he didn’t claim the typeface as his own by giving it a specific name. In modern times, however, the rise of digital fonts brought several faithful reproductions of the typeface you might want to check out: Gutenberg B, Gutenberg C, Bibel, 1456 Gutenberg B42 font family, 1454 Gutenberg Bibel, Gutenberg Textura, etc.

Gutenberg’s instrumentality shines through his dedication to replicate the distinctive handwritten feel all manuscripts evoked in readers back then.

Print went as far as incorporating several variations per letter to mimic handwriting irregularities, as well as ligatures, and combined letters. Many ligatures used by Gutenberg are uncommon even in present-day Unicode.

On a more nerdy note, surviving copies show us the following typeface measurements:

Approximate layout of the Gutenberg Bible.

The mechanics of Gutenberg typography

Still, Gutenberg’s precise method of typefounding is unknown and is to this day a subject of considerable debate. Popular research suggests that it was at least similar to the first documented process of traditional punchcutting two decades later (a method that dominated printing up until 1900).

Other hypotheses (rather inconclusive) include: 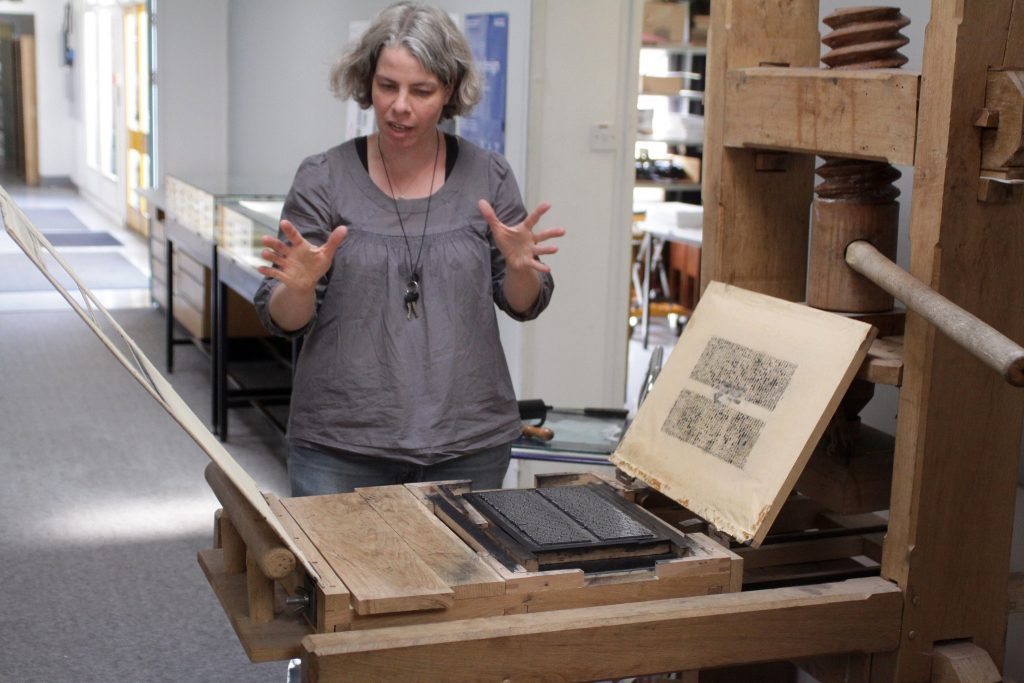 Reconstructed Gutenberg press, placed at the Department of Typography and Graphic Communication at the University of Reading, UK. Photos by Ben Mitchell.

The Gutenberg Bible is not typeset in a simple sequence from the first to the last page. Typesetting studies of surviving copies point out forms of consistency — most likely developed to better cooperation between type compositors involved in the print.

The B42 Gutenberg font consists of about 270 sorts – 6 punctuation marks, about 55 basic sorts, 60 ligatures, 120 abbreviations, and abutting types – so that the printed pages could look familiar to contemporaries accustomed to reading manuscripts.

Some of the typesetting rules include: 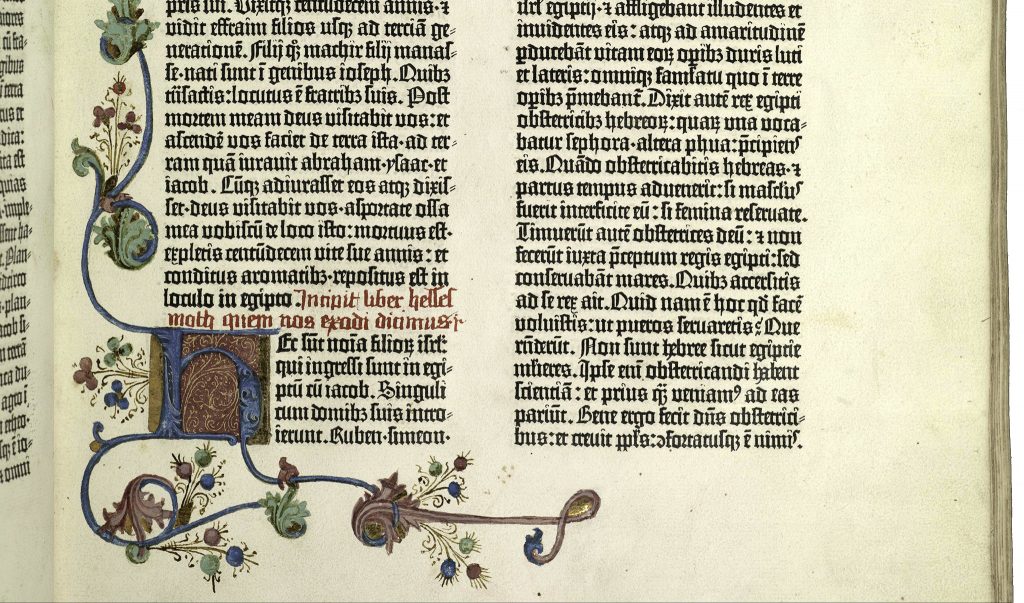 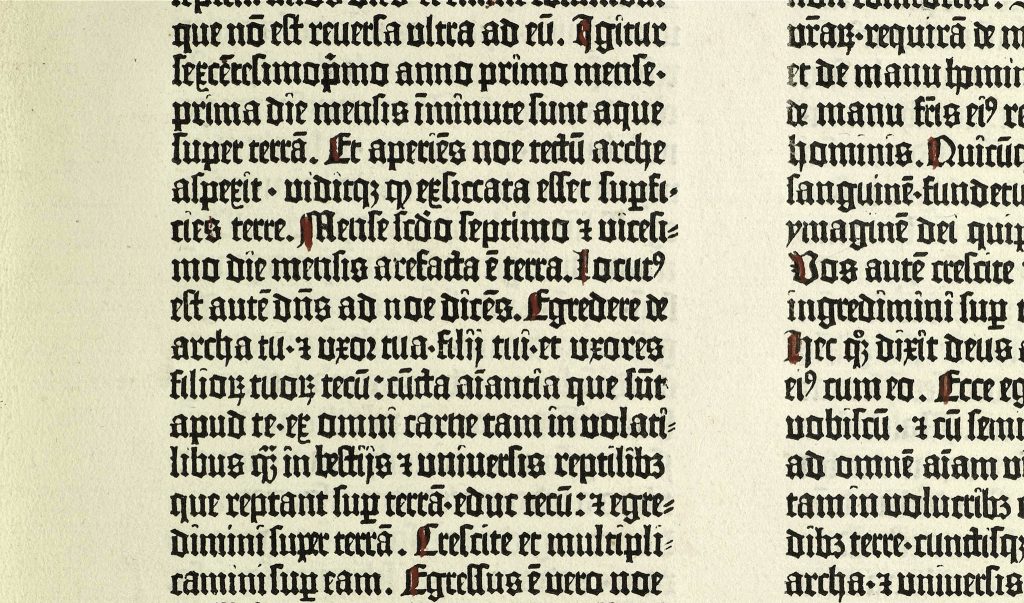 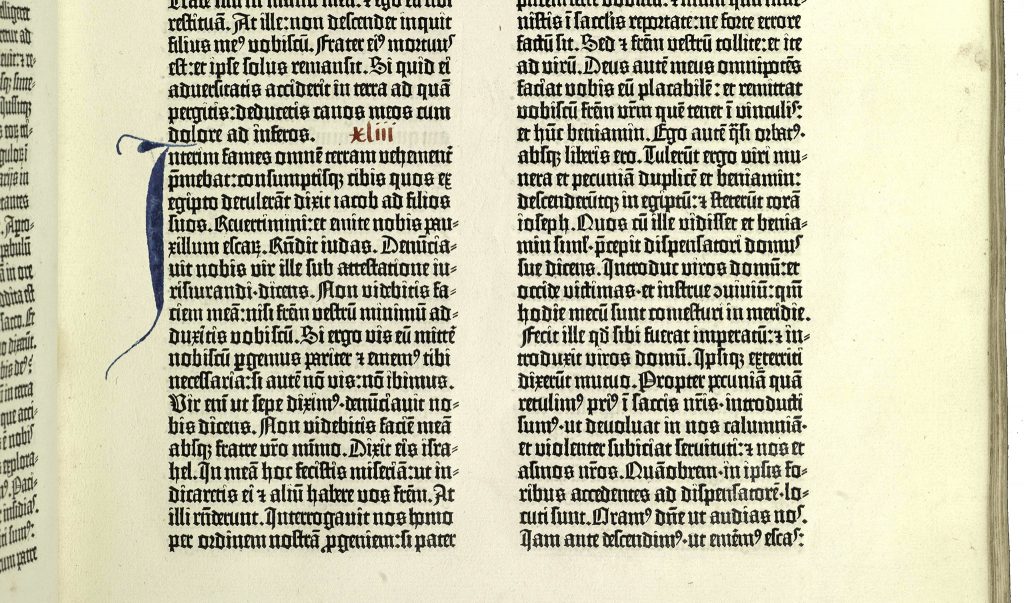 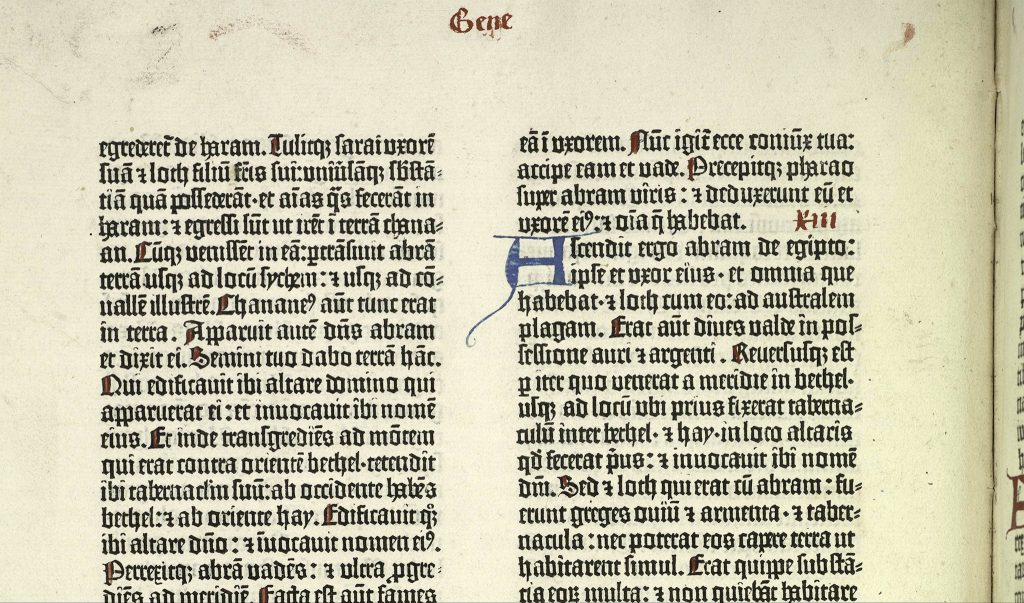 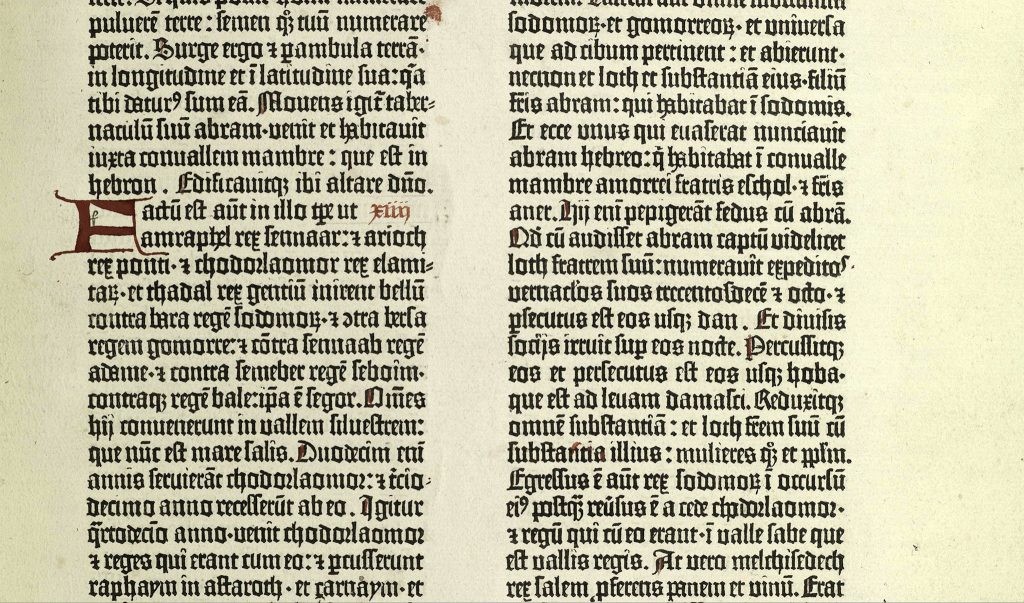 Details from the Gutenberg Bible, an edition dating from ca. 1455-56.

Stop-press variants of the Gutenberg Bible

However, in search of collation, the irregularities throughout the Gutenberg Bible copies have been further examined with the help of digital technology. Results strongly support the hypotheses that the stop-press variants were made at an early stage in the print run of each page, and only once.

Pieces of evidence suggest that stop-press corrections were made by each press-crew rather than a corrector in charge of all the printed sheets.

These stop-press variants may be classified roughly into nine categories.

More than a book…

It would be ambitious to claim that Gutenberg is the forefather of typefounding and printed books. In truth, it was a series of events throughout human history that led to the evolution of typography in printing.

It is, however, only natural to ask the question:

If it weren’t for Gutenberg’s vision for mass production and the following Printing Revolution, was Europe in for a crippling delay in its Enlightenment?

We hope you enjoyed this brief retrospective journey. Feel free to explore modern typography in all its variety, here at Fontfabric.

When you click the button you'll receive a zipped file with your free font, End-User License Agreement and installation instructions.