As a worthy sequel to our previous retrospective journey through the history of the Cyrillic script, we now immerse you further into the aesthetic and design specifics of the Bulgarian stylistic form.

On the day that over 260 million people honor the Slavic Script, it’s humbling to look back at centuries-old calligraphic traditions.

It’s also a time to contemplate our role as font designers at Fontfabric Type Foundry in the development of the Cyrillic typefaces. Furthermore, to recognize the local rounded letterforms through a wide variety of modern fonts.

Not So Long Ago

The 9th-century originating Cyrillic script has come a long way to its most popular modern form—the grazhdanskiy shrift (Civil Type)—the present status quo following the significant modernization reforms by Peter I in the early 18th century. It was back then, the Cyrillic script used the Latin script as the basis for its new uppercase and lowercase letters.

It’s worth noting that Peter’s reform didn’t take roots swiftly. Between the lack of a unified handwriting script, numerous sketches for new letters, painstaking attempts to combine the semi-uncial and Western characters, delayed approvals, and the physical time required to produce a printed book—it was a challenge of a lifetime. 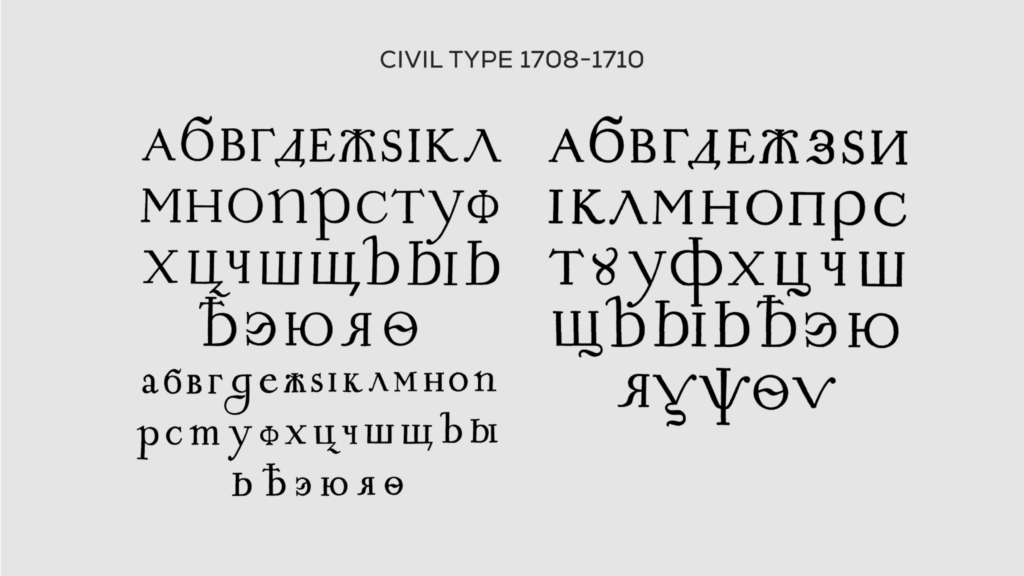 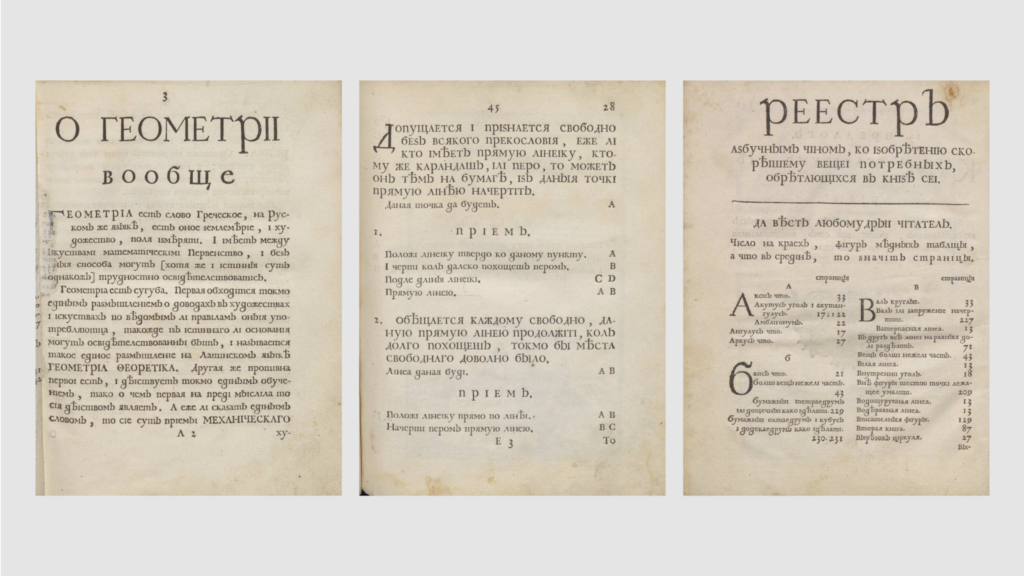 Sources of the period show that some letters like “d”, “t”, and “p” went through several changes combining both romanized and local calligraphic forms in the years before Peter I approved a final design of the Civil Type in 1710. These continue to appear in printed texts for another hundred years before the Cyrillic letterforms stabilized.

The now established civil type dominated printed book layouts in Bulgaria well until the post-World War II period. It was then, a group of prominent local artists and type designers decided to build upon it and develop a localized system.

This immense 20th-century undertaking would seal our rich cultural heritage in printing ink and later find its rightful place in the global digital typographic scene. 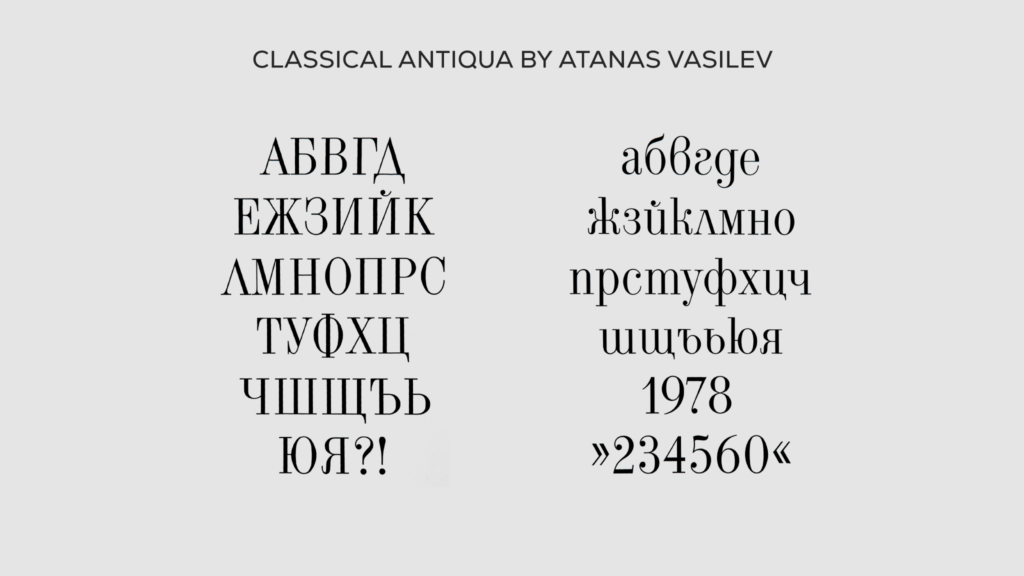 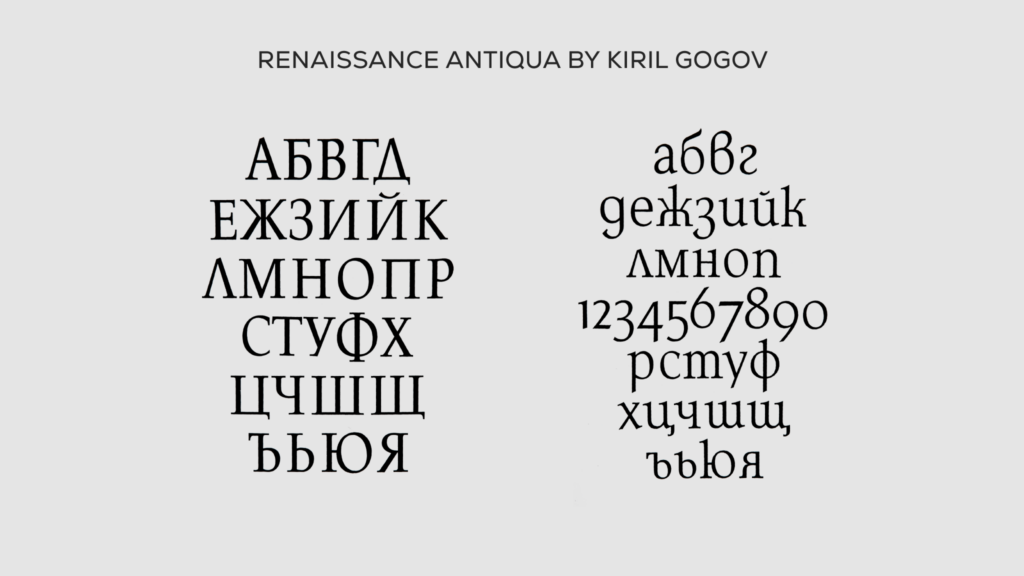 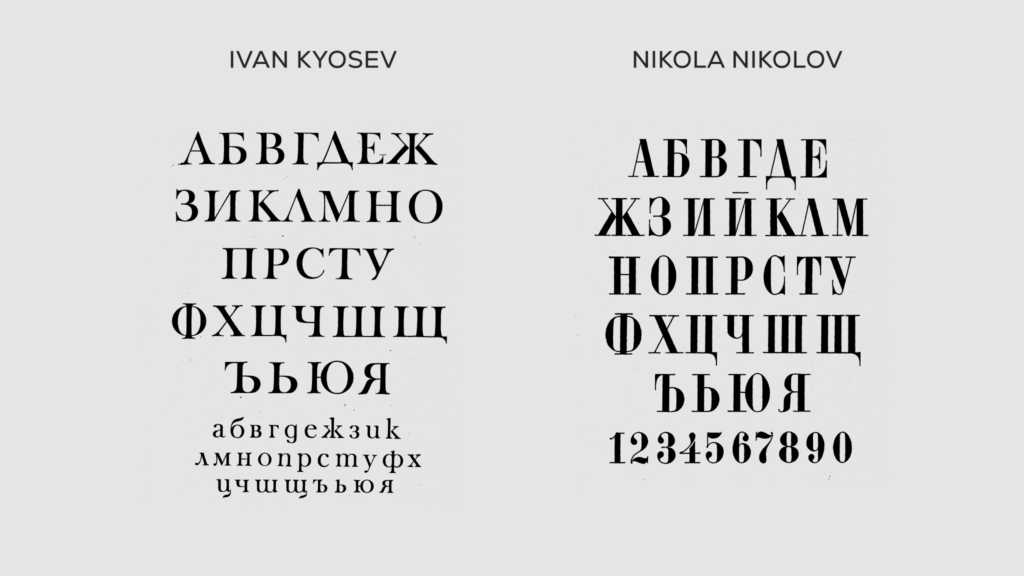 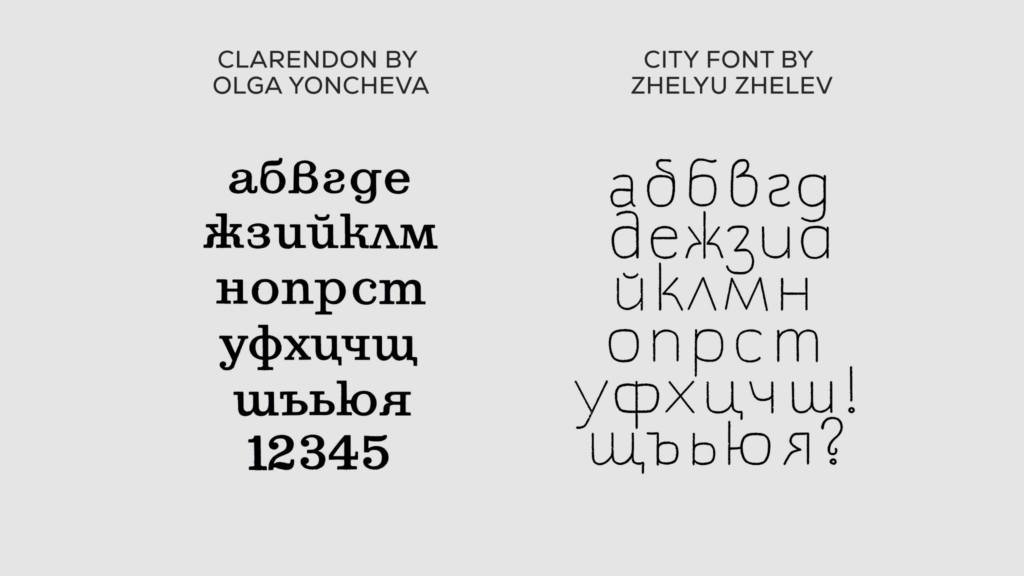 The collective efforts of these artists and type designers resulted in substantial research of the Cyrillic script’s evolution. They went through medieval writings, letters, and books to explore the calligraphic structure and flow of our ancestors’ handwriting traditions.

One particular source from the 14th century stands out—the “Evtimiev Sluzhebnik” made by the priest and scriber Gerasim. A precedent to semi-uncial writing, this shorthand manuscript claimed to have inspired some of the rounded letterforms in today’s localized system. There are many more examples from the period until the 18th century, and it’s no secret that the calligraphic traditions often emerge in semi-uncial sources in both Russia and Bulgaria. 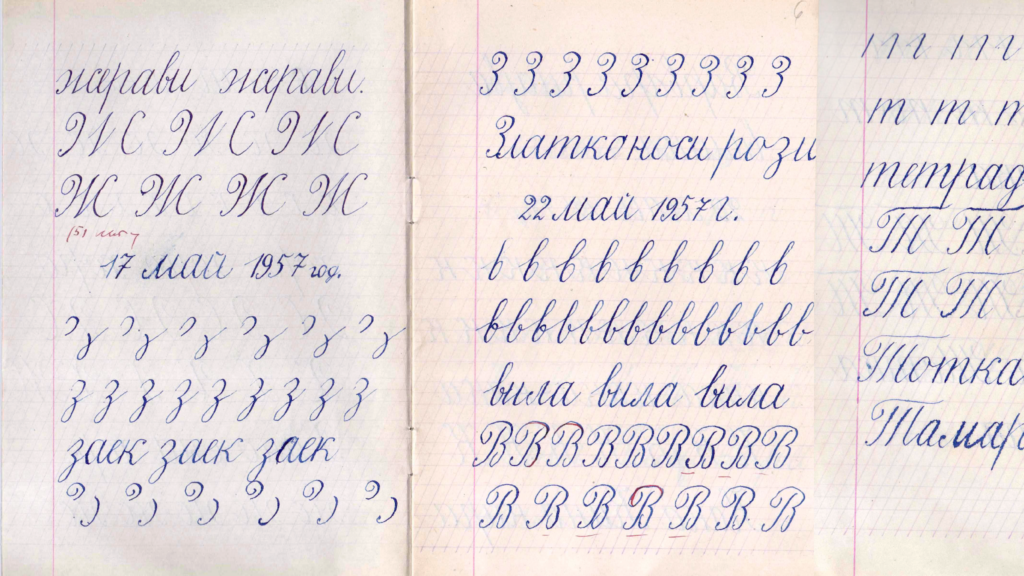 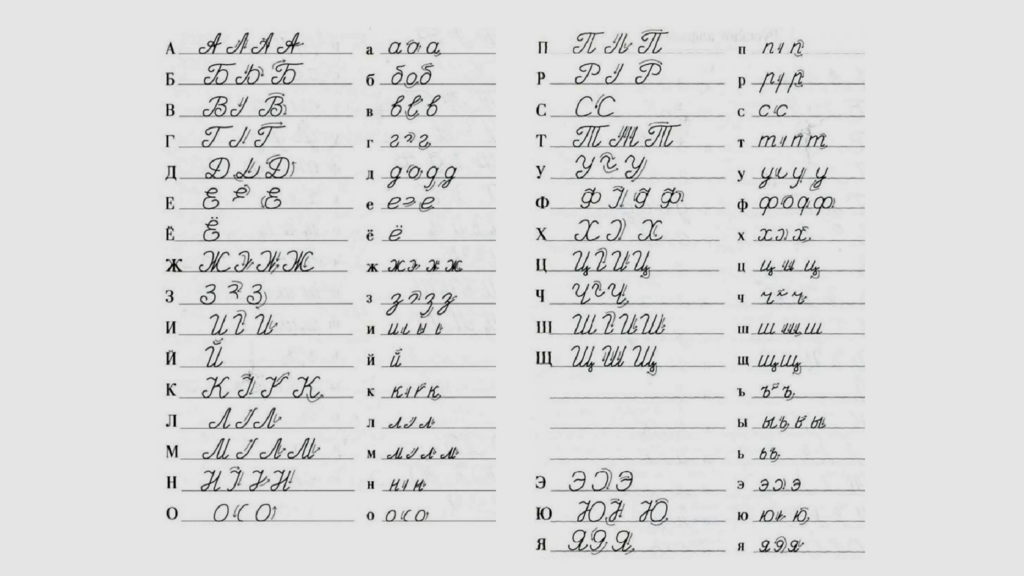 It’s also important to note that both countries share the same handwriting style taught from a young age in schools to this day. It comes as no surprise that type designers from Slavic countries explore different stylistic variations of separate glyphs even before the so-called “First Bulgarian Type Wave.”

But it wasn’t until the 1950s that this collective of Bulgarian artists unanimously agreed on the alternate localized letterforms that fill the pages of printed books today. Rounded Cyrillic is characterized by a significant differentiation between uppercase and lowercase letterforms following the traditions of Latin script. Thus bringing the Civil Type a step further in the Cyrillic script’s development.

Lowercase letters derive from the handwritten traditions analyzed from centuries-old manuscripts. This quality made letterforms easy to recognize and the silhouette of the words more pronounced.

Another curious observation is the preserved connection between handwritten and printed uppercase letters in the localized system.

To truly evaluate the importance of the rounded alternative of the Cyrillic script, we’ll have to examine individual letters and their design specifics.

Letterforms and aesthetic of the Rounded Cyrillic

There are other stylistic variations of the Cyrillic script in Serbia and Macedonia. Still, for this article, we’ll mostly use the Russian standard (also referred to as Traditional Cyrillic) for comparison.

What immediately stands out is the calligraphic structure of various lowercase letters and some of the capital ones.

While the greater letterform variety and roundness assist readers in recognizing a combination of symbols much faster, there is a downside to this design decision.

Rounded Cyrillic has a lower information density, making a text typeset with the Bulgarian stylistic variation around 4% longer.

That’s because of the lowercase “t” calligraphic structure, making it 40% wider than its Russian counterpart.

Also, the letter “t” is the most frequently used consonant and, arguably, one of the major reasons printing houses in Bulgaria prefer to use the traditional Cyrillic script. Paper reduction.

The oval constructive elements in Rounded Cyrillic alter the texture of typesetting when compared to the letterforms in Traditional Cyrillic. Thereon, we observe different rhythms in paragraphs, as shown below:

Capital and lowercase letterform differentiations go beyond the round characteristics of symbols.

Both present numerous ascenders and descenders, which helps visually separate letters from one another. Compared to the traditional Cyrillic, letters are easier to tell apart for both type enthusiasts and untrained readers. 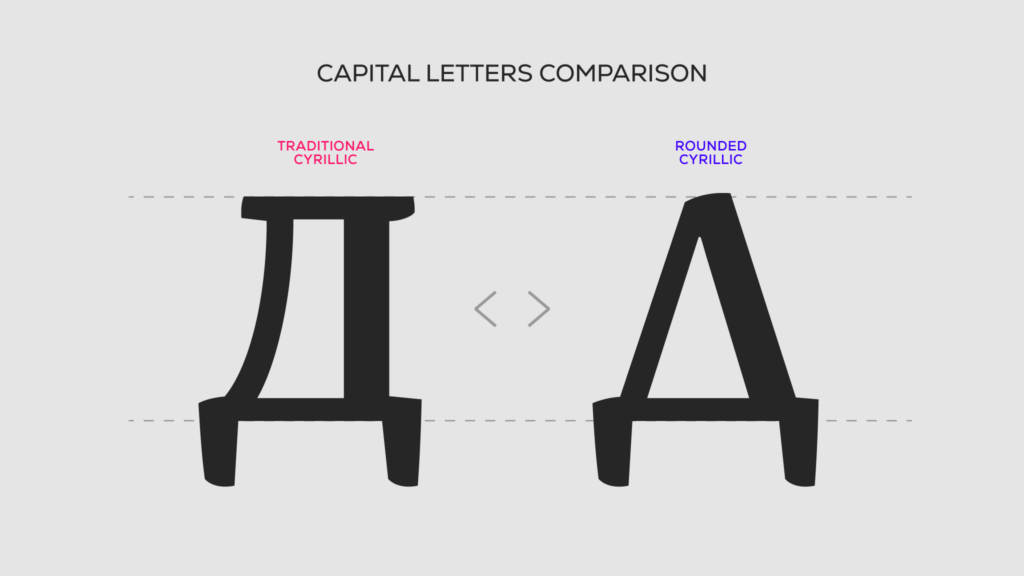 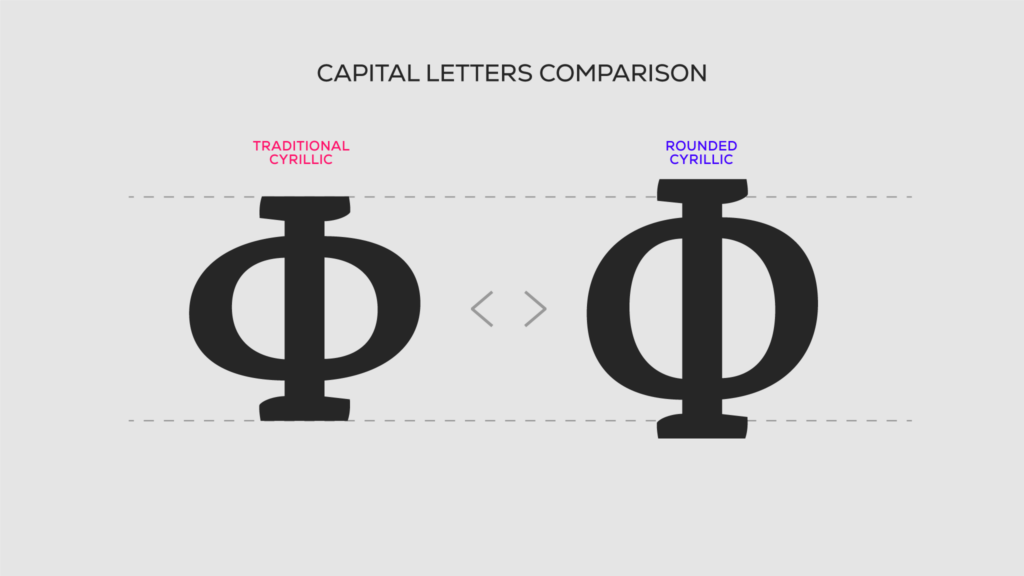 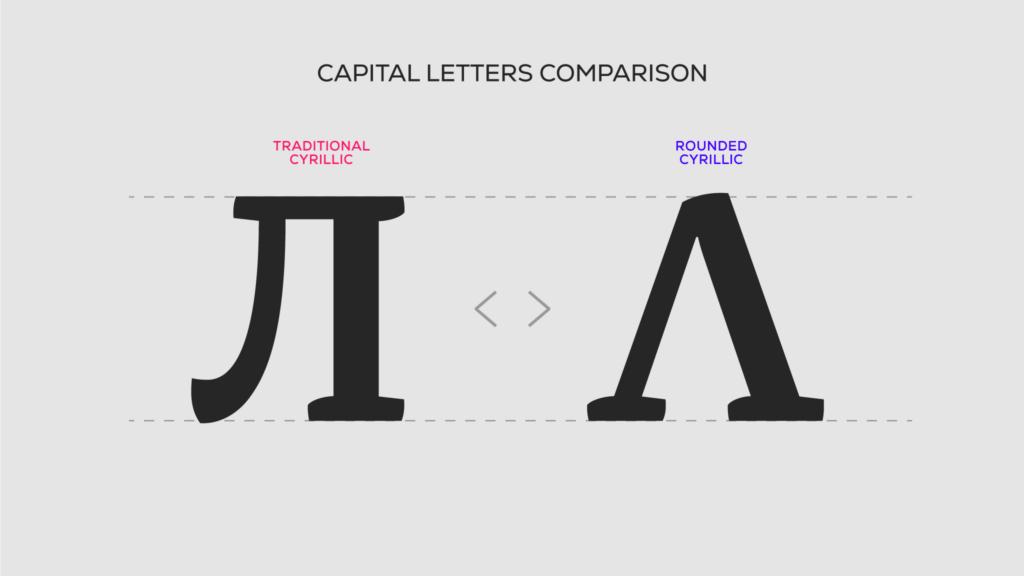 A curious pair of letters, the “L” and “D” remain the same in both capital and lowercase Russian forms, with “L” presenting a calligraphic touch to its extended leg and various styles of terminals. However, uppercase letters could have either the square or triangular style in the Bulgarian stylistic variation, with “D” presenting an entirely different shape in lowercase.

Another letterform that initially escapes the eye is the one of the uppercase and lowercase “F.” Traditional Cyrillic presents a compact capital “F.” Compared to the continuous round shape of the Bulgarian form, the traditional one looks more complex.

There are many creative variations of these letters in contemporary fonts. Type designers haven’t arrived at a mutual conclusion on the style of letters to use. We observe, however, that some designers prefer the traditional form of the lowercase “d” to avoid problems with spacing.

While the traditional Cyrillic prefers symmetrical serifs, the rounded variation favors one-sided serifs pointing to the left, as shown below.

Italic follows the Latin principles, but as both Russian and Bulgarian forms follow cursive, calligraphic shapes, we observe fewer differences than in the upright style.

In our modern-day practice, the localized form of the Cyrillic is implemented in the fonts through codes as an alternate stylistic variation. This is done so the rounded Cyrillic replaces the default traditional Cyrillic characters whenever a user switches to the localized version.

In the off-the-shelf fonts published by Fontfabric Type Foundry, the rounded Cyrillic is available through the OpenType features. It is usually supported via a locl feature and as a stylistic set for wider software support.

OpenType features are supported in different ways across applications, though. When possible, set the language of the text you’re working on to enable localization automatically.

Also, make sure to explore the stylistic alternates and stylistic sets available as some font designers offer an additional flair to the characters’ set.

Celebrate Cyrillic with us

The popularization and preservation of the Cyrillic script in all its stylistic variations go beyond the font creators. Eleven centuries of writing history aren’t lost in fragile manuscripts. Moreover, they are now closer than ever.

Celebrate Cyrillic with us and head over to our full font collection.

An inside look: How partnering with a type foundry saves projects from dealbreakers

When you click the button you'll receive a zipped file with your free font, End-User License Agreement and installation instructions.